“The mission of the mathematics department is to provide an environment where students can learn and become competent users of mathematics and mathematical application. Moreover, the department will contribute to the development of students as mathematical thinkers, enabling them to become lifelong learners, to continue to grow in their chosen career paths, and to function as productive citizens.”

Building enduring mathematical understanding requires understanding the why and how of mathematics in addition to mastering the necessary procedures and skills. To foster this deeper level of learning, AP Calculus AB is designed to develop mathematical knowledge conceptually, guiding you to connect topics and representations throughout the course and to apply strategies and techniques to accurately solve diverse types of problems.

By the end of the course you should be able to:

Work with functions represented in a variety of ways: graphical, numerical, analytical, or verbal. You should understand the connections among these representations.
Understand the meaning of the derivative in terms of a rate of change and local linear approximation and use derivatives to solve a variety of problems.
Understand the meaning of the definite integral both as a limit of Riemann sums and as the net accumulation of change and use integrals to solve a variety of problems.
Understand the relationship between the derivative and the definite integral as expressed in both parts of the Fundamental Theorem of Calculus.
Communicate mathematics both orally and in well-written sentences and explain solutions to problems.
Model a written description of a physical situation with a function, a differential equation, or an integral.
Use technology to help solve problems, experiment, interpret results, and verify conclusions.
Determine the reasonableness of solutions, including sign, size, relative accuracy, and units of measurement.
Develop an appreciation of calculus as a coherent body of knowledge and as a human accomplishment.

Students who successfully complete the course and examination may receive credit and/or advanced placement for a one-semester introductory college statistics course.

Business Math is a course in which students will learn how to apply mathematics to both manage personal finances as well as understand the mathematics of retail businesses. This is a Two-quarter course; during the first and second quarter, this course will cover personal finance topics, and during the second and third quarter this course will cover business mathematics. The personal finance unit includes topics such as personal banking, payroll and salary, taxes, personal loans, home and auto expenses, living expenses and budgeting, insurance, and investing. The business math unit includes topics such as mathematics of buying and selling, depreciation, financial statements, and business statistics.

This course is designed to cover topics ranging from polynomial, rational, and exponential functions to conic sections. Each function will be explored algebraically and graphically (geometrically). Trigonometry concepts such as the unit circle and the Laws of Sines and Cosines will be introduced. After Trigonometry, students will explore sequences, series, and probability. At the end of the year, we will begin analytic geometry and calculus concepts such as limits, derivatives, and integrals. Facility with these topics is especially important for students intending to study calculus, physics, and other sciences, and/or engineering in college.

This is the second course in the college preparatory sequence. This course addresses the four strands of the Framework with major emphasis on the Geometry Strand. In the content standards of this strand, students study a full geometry curriculum. Major content areas include the study of lines, angles, polygons, circles, and congruent and similarity relationships. Students apply area and volume formulas to solve problems. They use inductive and deduction reasoning processes to justify conclusions.

Students address the standards of the Patterns, Relations, and Function Strand as they work in the coordinate plane with transformations, distance and midpoint formulas, and parallel and perpendicular lines. The Number Sense Strand is addressed as students work with powers and roots and use estimation in problem solving.

Students use sample spaces to find simple probabilities, which is consistent with the standards of the Probability and Statistic Strand. In all content strands students engage in the core concepts of the Mathematics Framework through: problem solving, communicating, reasoning and connecting.

This Algebra 1 course is the first in a four-year college prep sequence. This college prep course addresses the Common Core State Standards for Mathematical Content with major emphasis on the conceptual categories of Number and Quantity, Algebra, Functions, and Statistics and Probability. In the Number and Quantity category, students will investigate the Real Number System and reason with varying quantities. The Algebra category will have students seeing structure in expressions, performing arithmetic with polynomials and rational expressions, and creating and reasoning with equations and inequalities. Students will learn to interpret and build functions, and will learn about the linear, quadratic, and exponential models in the Functions conceptual category. Content areas including scatter plot, line of best fit, and basic counting principles connect to the Statistics and Probability category. The Geometry conceptual category will cover similarity, right triangles, and Trigonometry. Students will engage in the Standards for Mathematical Practice throughout the year by making sense of and solving problems, reasoning and communicating mathematically, representing and connecting, and seeing structure and generalizing.

Mathematics III focuses on the development of algebraic thinking and skills. It also provides a comprehensive program including number sense and operations, proportional reasoning, geometry and probability. By the completion of Mathematics III, students will have achieved the ability both to recognize abstractions and to express those abstractions formally.

Mathematics III is aligned with the five Strands of the Massachusetts Frameworks and students will know Number Sense and Operations: Students extend their understanding of exponents and make connections between exponents and roots. They use the inverse relationships of addition and subtraction, and multiplication and division, and squaring and finding the square roots to simplify computations and to solve problems. They also learn how to select and use appropriate operations to solve problems with rational numbers.

Patterns, Relations, and Algebra: As they revisit function families in increasingly formal ways, students learn to recognize the type of function from its graph or equation. They use technology both to investigate how constants and coefficients affect graphs and to explore intercepts, maximum and minimum points, and lines of symmetry.

Geometry: In grade 8, students are introduced to symmetry and geometric transformations both on and off the coordinate plane. They analyze, apply and explain the relationship between the number of sides and the sum of the interior and exterior angle measurements of polygons.

Measurement: Students select, convert and use appropriate units of measurement or scale. When given formulas, they are able to convert from one system of measurement to another; determine formulas and understand surface area and volume. Students also use models, graphs and formulas to solve simple problems involving velocity, density and rate of change.

Data Analysis, Statistics, and Probability: Students draw on all their statistical knowledge to solve complex problems involving real data. They describe the characteristics and limitations of a data sample and identify different ways of selecting a sample. Students continue with their understanding and use measures of central tendency, including mean, median, mode and range to compare different sets of data. Their use of tree diagrams, tables, and organized lists permit them to compute probabilities of simple compound events.

Students who successfully complete this course may enroll in Algebra I in High School.

The Number System – Apply and extend previous understandings of operations with fractions to add, subtract, multiply, and divide rational numbers.

Expressions & Equations – Use properties of operations to generate equivalent expressions.

Statistics & Probability – Use random sampling to draw inferences about a population.

The students will learn to justify and communicate their problem solving strategies by referencing math properties, modeling problems, and discussing their mathematical thinking as identified in the Standards for Mathematical Practice and Math Process Standards

Math 6 uses the Massachusetts common core state standards (CCSS) to address the skills needed to be successful in 6th grade and beyond. The course is broken down into eight domains which include the following:

Mathematics II is a comprehensive program including number sense and operations, proportional reasoning, geometry, probability, and data. Mathematics II focuses especially on the development of algebraic thinking, from a common sense approach in which mathematics is rooted, to an abstract and generalizable discipline. Because the program balances skills, applications and theories, students are expected to hypothesize solutions to problems, and then explain, justify, and verify their answers and approaches, both orally and in writing. Topics are revisited periodically with increasing depth and formality. Students develop conceptual understanding and then use technology to extend and broaden their understanding to solve more complex problems. Mathematics II is aligned with the five strands of the Massachusetts Frameworks, and students will know

 Number Sense and Operations: Students investigate algorithms for operating with signed numbers. They also learn about operating with integer exponents and develop a sense of very large numbers. Mathematics II also emphasizes ratio, proportion, and percent and includes a variety of problems that require students to apply proportional reasoning.

 Patterns, Relations, and Algebra: Links are made between graphs and algebraic equations. Students explore linear functions in depth and are introduced to quadratic, reciprocal, and exponential functions. They begin to see that certain types of relationships occur frequently and that these relationships may be grouped according to both the shapes of the graphs and the characteristics of their equations.

 Data Analysis, Statistics, and Probability: In Grade 7, Mathematics II, students are introduced to probabilities within dependent events. They analyze games to determine whether they are fair. Students also focus on the concept of “sampling” and create box-and-whisker plots.

Financial Literacy provides students with basic personal finance tools and knowledge that will enable them to take control of their financial future. The course is organized into ten units that cover a variety of topics. The semester-long course covers all of the essential financial literacy topics necessary to become a financially capable student. Topics include taxes, banking, credit, budgeting, investing, career planning, and more. By the end of this course, students will have a thorough understanding of financial literacy topics and be prepared to handle the financial responsibilities that exist after graduation. 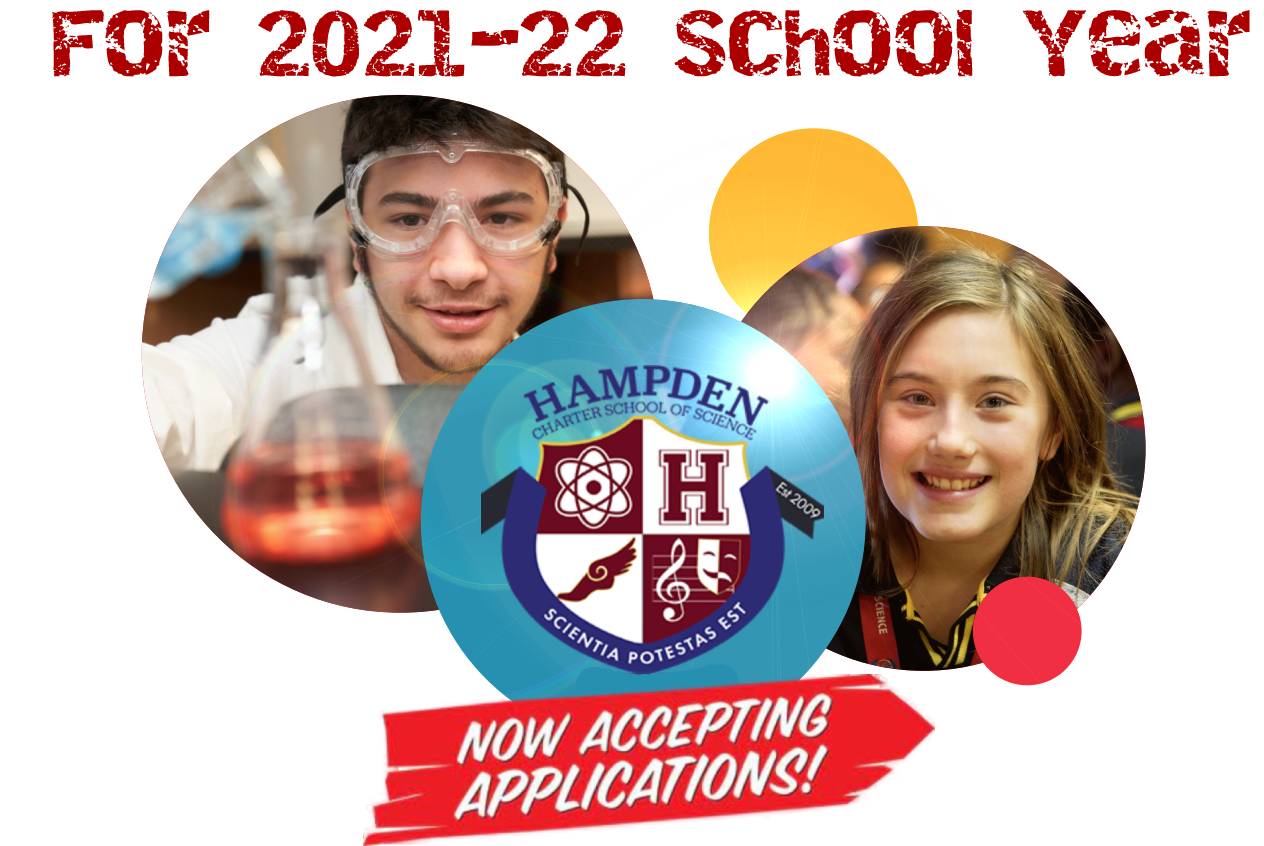 All HCSS school buildings will be closed tomorrow (Friday, December 18th) due to inclement weather. All classes will take place virtually and the staff will be working remotely. If you have any questions or concerns, please contact your child building administration.
HCSS-East:
Email: hcsseasthotline1@hampdencharter.org
Phone:619-624-1805 (You can leave a message)
HCSS-West:
Email: hcsswest@hampdencharter.org
Phone: 413-278-5450 (You can leave a message)
Stay warm!